Tornado is 5813's robot for the 2020 Infinite Rechage season. Unfortunately, all official events for the season have been cancelled. Team 5813 is looking forward to the opportunity to continue iterating for the replay of Infinite Recharge in 2021.

Our 2020 robot, Tornado, is able to intake power cells from the floor, shoot power cells into the outer port or inner port from almost anywhere on the field, and climb on the switch at the end of the match. It can also drive under the trench run.

Tornado features a power cell intake, a cyclone hopper and feeder, a shooter with adjustable hood, and two telescoping-arm climbers. Details of the subsystems will be released at a later date. 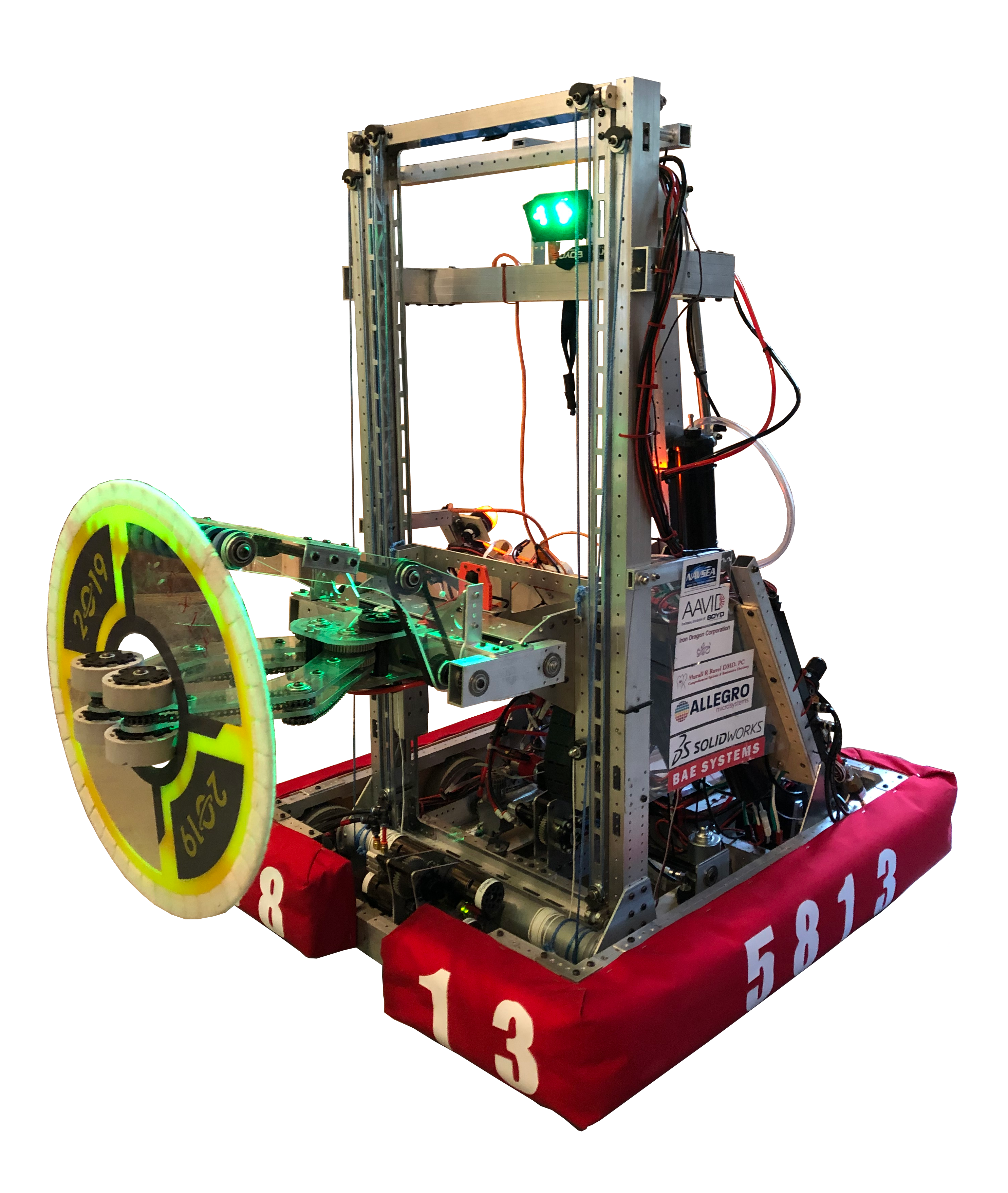 Anonnado is 5813's robot for the 2019 Destination: Deep Space competition season. This season, our two District Events were the SE Mass event in Week 2 and the Central Mass event in Week 5. At the SE Mass competition, our safety captain won Safety Star of the Day, and the team made it to the finals. Then, at the Central Mass competition, we made it to the semifinals and won the Autonomous Award. We were excited to qualify for the prestigious New England District Championship for the fourth time in our Team history!

Our 2019 robot, Anonnado, is able to collect hatch panels from the feeder station, collect cargo from the ground, place hatch panels and cargo anywhere on the Rocket or Cargo Ship, and climb to HAB level 3 at the end of the match.

Anonnado features a multi-purpose intake, a 2-stage continuous elevator, and a suction climber.

The intake has two modes: cargo mode and hatch panel mode. In cargo mode, the intake opens up and rotates down to pick up the cargo. A horizontal roller pulls the cargo into two vertical side-rollers. The intake then rotates up to score on the Rocket and stays rotated down to score in the Cargo Ship. The two vertical side-rollers are on a pivot. When the arms pivot together, the rollers collect hatch panels from the feeder station. The wheels spin in the opposite direction to place the hatch panels.

The elevator is a 2-stage continuous elevator that can travel up to place cargo and hatch panels up to level 3 of the Rocket. The elevator is powered off of a custom 4-775Pro gearbox that uses a ball shifter to activate a braking mechanism.

At the end of the match, a pneumatic cylinder deploys the suction climber, which is on a separate elevator. After the climber is deployed, the suction pad adheres to the top platform of HAB level 3 using a suction pump. After the pad is adhered sufficiently, the climber arm is pulled down the elevator until Anonnado's bumpers are elevated above HAB level 3. The suction pad does not take up much space on the HAB 3 platform, which allows multiple-robot-climbs.

Anonnado uses a six-wheel West Coast Drive with four six-inch Colson wheels towards the front of the robot and two six-inch VEX Pro Omni wheels on the back of the robot. The drivebase uses 4 NEO motors with a VEX Pro Ball Shifter gearbox. 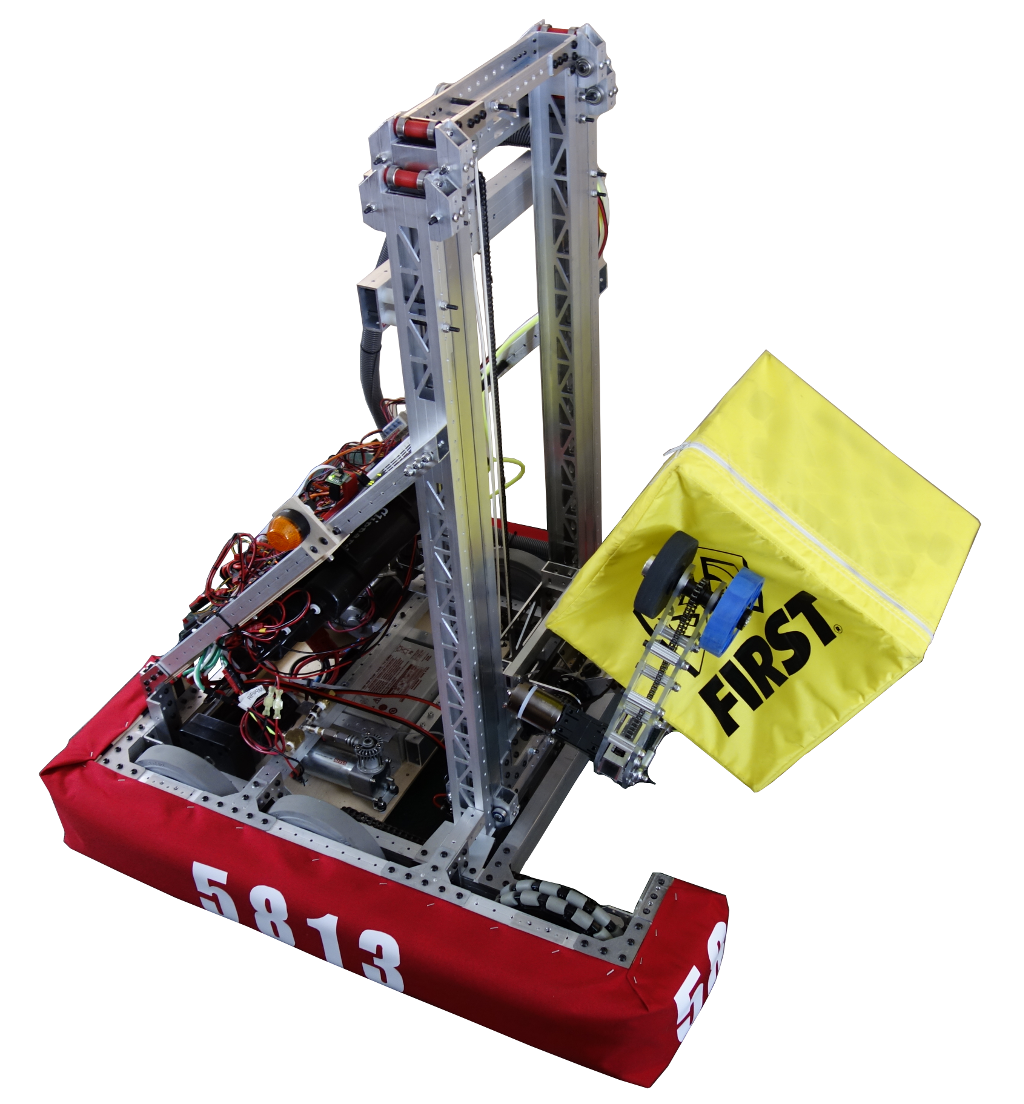 Our 2018 robot, Insomnado, is able to intake cubes in any orientation; place cubes in the exchange, switch, and scale; park on the platform at the end of the match; and climb onto the rung.

Insomnado features a cube intake, a wrist, a 3-stage cascading elevator, and a climber.

The cube intake can intake cubes in any possible orientation and can either shoot it out using the intake wheels or drop the cube by pneumatically opening the claw.

The wrist rides on the shuttle, which is the final elevator stage, and can rotate to position the intake at different angles. Once the shuttle reaches the top of the elevator, the wrist can flip back and score cubes out the back of the robot.

The elevator is a 3-stage cascading elevator that can reach up to place a cube on top of a stack of two cubes in the upper scale position. Our elevator and climber are run off of a custom 4-775Pro gearbox that uses a pneumatic shifter to switch between powering the elevator and powering the climber.

At the end of the match, our climber arm extends and places the hook on the rung. After the hook is placed, our elevator/climber gearbox reels in the hook and pulls our robot off the ground and into scoring position.

Insomnado uses a six-wheel West Coast Drive with four eight-inch Colson wheels towards the back of the robot and two eight-inch VEX Pro Omni wheels on the front of the robot. The drivebase uses 4 CIM motors.

Insomnado has several autonomous modes. Our first 2018 auto starts in the center of the alliance wall and places one cube in our alliance-colored switch within three seconds into autonomous. Another autonomous mode starts on the left side of the field and places a cube in the correct scale plate. Additionally, we have a two-cube-center-switch auto, a near-side scale auto starting on the right, as well as a single cube side-switch auto that can start on either side of the field. 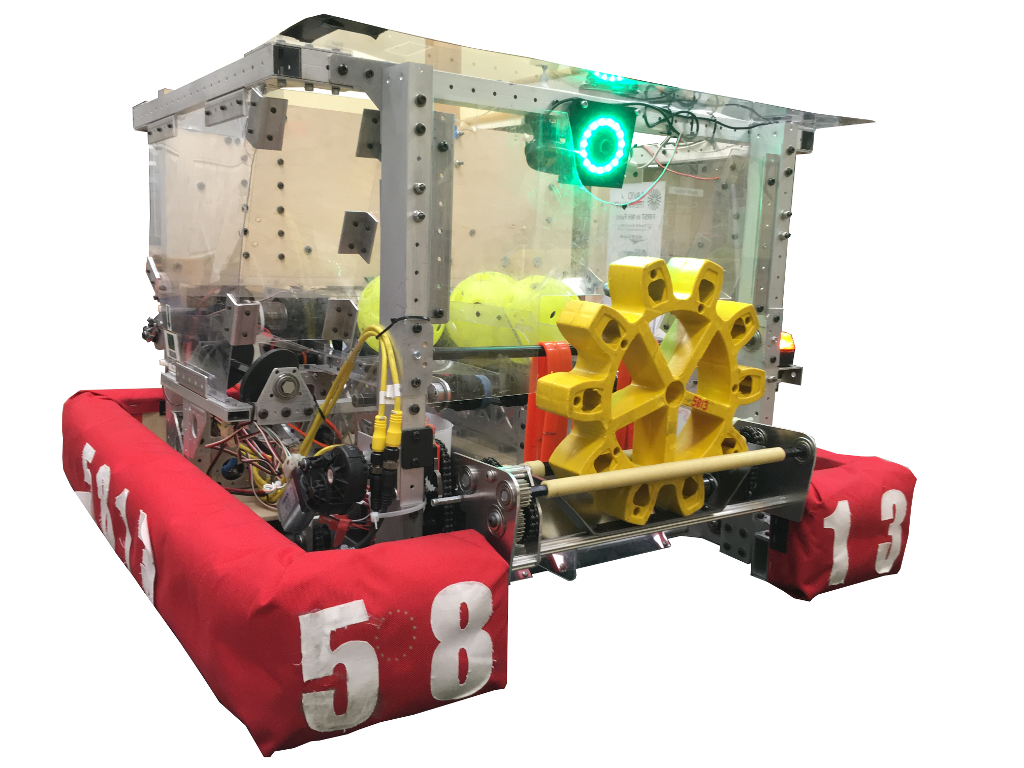 Torquenado is 5813's robot for the 2017 FIRST Steamworks challenge. This season was a very successful season for us! We were Quarterfinalists at WPI, Semifinalists at Southern NH, Finalists at the New England District Championship, and competitors at the FIRST Championship in St. Louis, Missouri.

Our 2017 robot, Torquenado, is able to retrieve gears for the airship, score fuel in the high efficiency boiler, and climb the rope to board the airship at the end of the match.

Torquenado is equipped with a gear mechanism, a fuel intake, a fuel tank, a dual-stream shooter, and a power-takeoff climber.

The gear mechanism, nicknamed the "Gear Goblin" by our team, is located on the front of the robot and uses two sets of horizontal rollers to pick up gears from the ground. After a gear is collected, the Gear Goblin rotates up to place the gears on the airship pegs. A wide field camera is mounted above the Gear Goblin so the drive team can see gears that they would not be able to see otherwise.

The fuel tank can hold about 50 fuel elements and can be loaded by either a hopper or the fuel intake. Using agitators, belts, and rollers, the fuel tank feeds fuel into the shooter.

The flywheel shooter has two channels, which allow two streams of fuel to be shot at once. The shooter uses four-inch Andymark compliant wheels to launch the fuel.

Behind the shooter is our power-takeoff climber. The climber is driven by all four CIM motors in our drivebase, which allows for a quick climb.

Torqeuado has autonomous modes that can place a gear on any of the three pegs. Additionally, we have autos that place a gear on the side peg and shoot 10 fuel into the boiler. 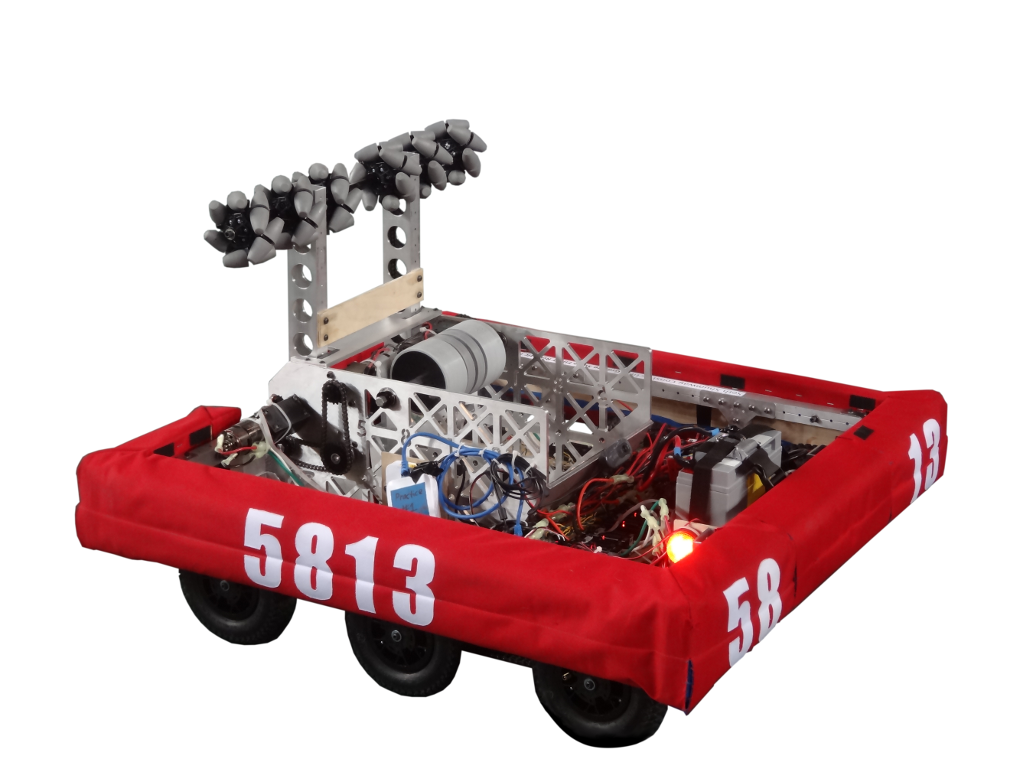 Goatnado is 5813's robot for the 2016 FIRST Stronghold challenge. This season was a big success for 5813. We were Semifinalists at the WPI and UNH district events and an an alliance captain in the Galileo Division.

Our 2016 robot, Goatnado, is able to retrieve boulders, shoot boulders into the high goal, cross defenses, and challenge the tower at the end of the match.

Goatnado is equipped with a boulder intake/defense manipulator, feeder, and shooter.

The boulder intake/defense manipulator, nicknamed Swagnado by our team, uses mecanum wheels to center the boulder as it is picked up by the feeder. The Swagnado is also used to push down the cheval de frise defense and lift up the portcullis by spinning the wheels out.

Once the flywheel shooter is spun up to the correct speed, the feeder propels the boulder into the shooter.

The shooter uses four-inch Colson wheels to launch the boulder into the high goal.

Goatnado can drive under the low bar and cross all Class A, B, and D defenses. Additionally, Goatnado can back through the sally port, spin around, and drive back across to weaken/damage that defense.

In autonomous, Goatnado can cross the low bar, rough terrain, rock wall, cheval de frise, and portcullis defenses. Additionally, we have an auto that crosses the low bar and shoots a boulder into the left high goal. 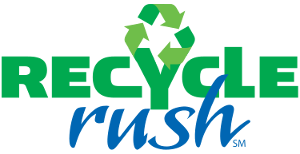 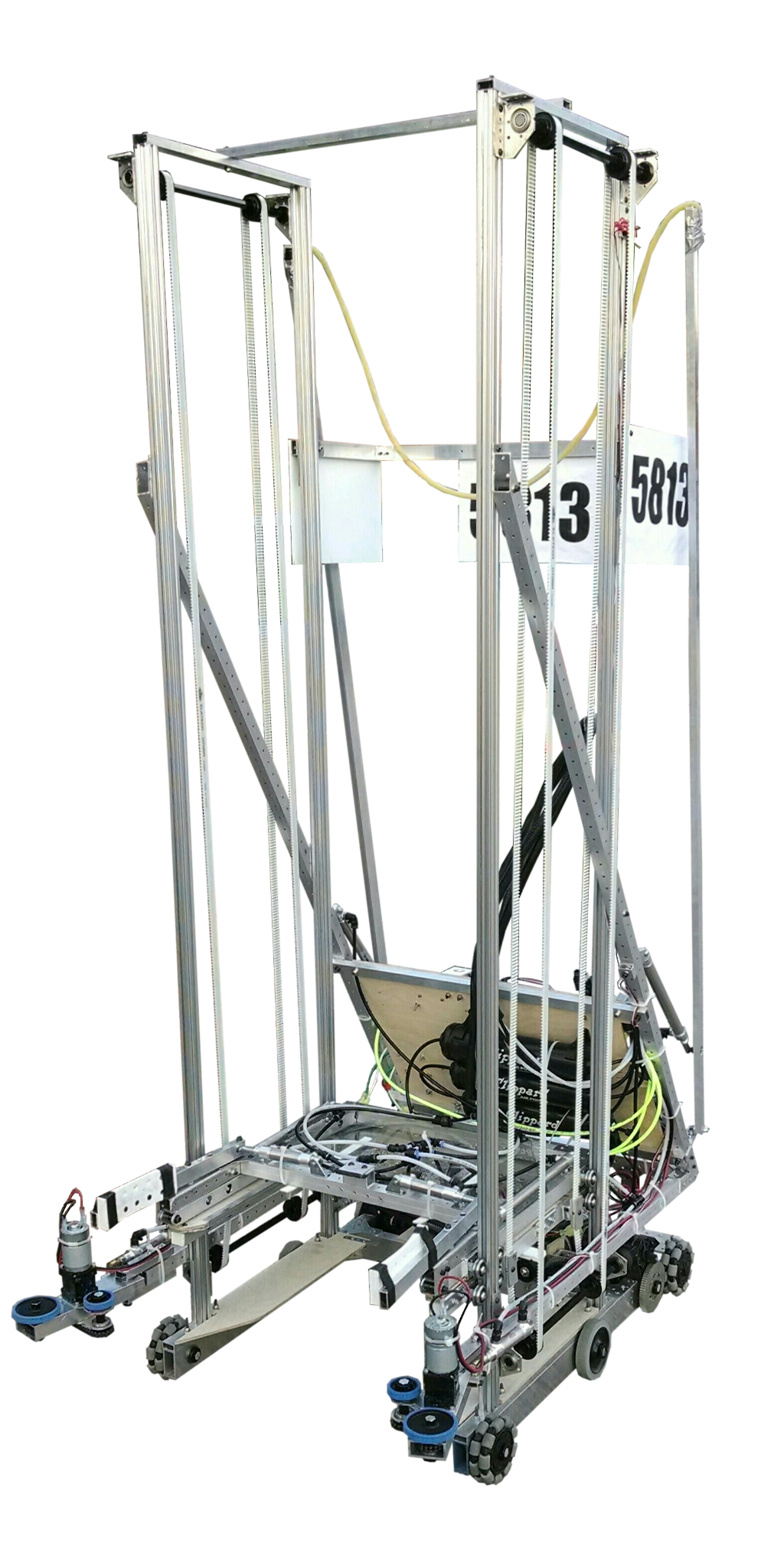 Totenado is 5813's pre-rookie robot for the 2015 Recycle Rush challenge. We used this project as an opportunity to learn how to use Solidworks and VEX Pro components. We had a great time and were Semifinalists at Battle of the Bay.

The two sides of the tote intake both have two Banebots wheels that spin to intake totes from either the landfill or the chute door.

Once the totes are inside the robot, the internal indexing stacking system lifts the totes to create stacks up to six-totes tall.

Once the landfill is partially cleared, the two arms on the back of Totenado can rotate back and use the surgical tubing between them to pull a recycling container off of the step.

In autonomous, Totenado can drive into the auto zone.