In compliance with FRC rules, this is our release of software components developed before and during 2021 that we may reuse in the future. A compressed archive of the source code can be downloaded here. 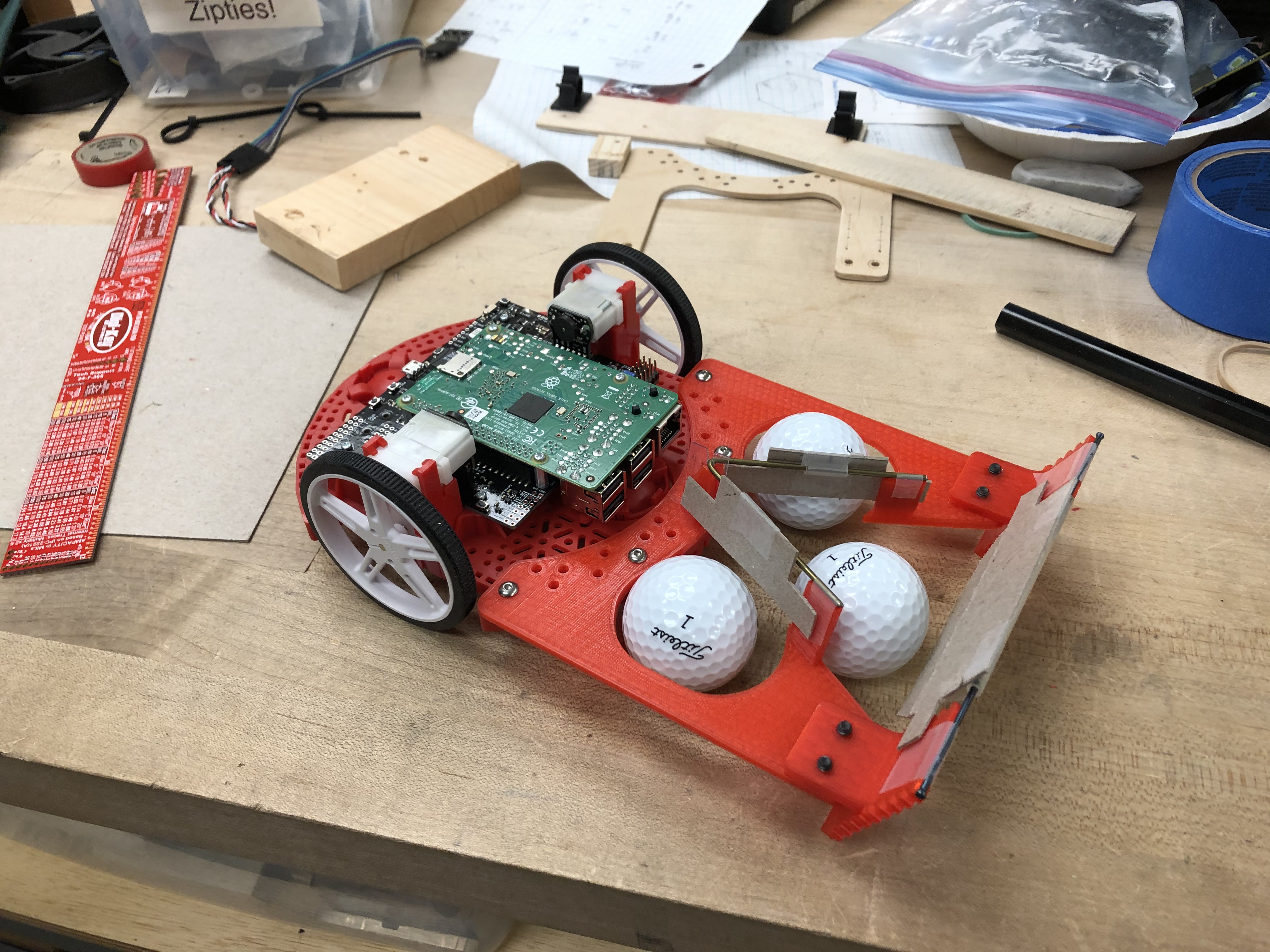 After opting to not participate in the second minibot challenge due to the Infinite Recharge at Home challenges, Morpheus was excited to participate in the third of the BAE Systems minibot challenges: Frantic Fetch. In Frantic Fetch, the ROMI robot must navigate the same course as the Bounce Path from Infinite Recharge at Home, but this time, the robot must pick up three golf balls at certain points along the path. Both the mechanical and software subteams collaborated on this robot, and we were proud to achieve a raw autonomous time of 16.37 seconds and a raw teleoperated time of 16.17 seconds. Each golf ball scored in the end zone reduced the time by 3 seconds, so our official times are 7.37 seconds for autonomous and 7.17 seconds for teleop. 5813's robot attachment was designed to be lightweight and passive for maximum simplicity. The catcher features three indexing flaps that hold the three golf balls in place during the runs. In the award ceremony today, we did not receive any awards, but we had a great time and learned a lot! Congratulations to all of the teams that participated in Frantic Fetch!

From March 27, 2021, to April 6, 2021, Morpheus has been practicing and filming our entries to the Scandium Group of the Infinite Recharge at Home challenges. The at home skills challenges are broken into five different challenges: Galactic Search, Autonav, Hyperdrive, Interstellar Accuracy, and Power Port. This season, we built Microburst, which is a brand-new robot that was specifically designed for these at-home challenges.

In the Galactic Search challenge, robots autonomously navigate the field and pick up three Power Cells before crossing an end zone line. The Galactic Search challenge features two red paths and two blue paths. Teams flip a coin to determine if they will be doing the red paths or the blue paths, but the robot is not told which path has been set up. Our team flipped a coin and got "red." Microburst was able to detect which path was set up and choose the correct autonomous path to pick up all three Power Cells. In the Galactic Search challenge, we got a time of 6.7 seconds on the Red A path and a time of 6.1 seconds on the Red B path which gives a combined time of 12.8 seconds.

In the Interstellar Accuracy challenge, teams have to shoot 15 Power Cells into the Power Port from four different zones on the field in under 5 minutes. The maximum score in the challenge is 45 points. In this challenge, we were able to score 44 points! We hit the Inner Port with 14 of the 15 Power Cells! The one Power Cell that hit the Outer Port was fired from the Red Zone.

The Scandium Group was very deep, with many top performing teams in the mix. Some of the prestigious teams in the Scandium Group include three-time-world-champion and Hall of Fame Team 67, 2009 world champions and 2019 Einstein Team 971, perennial PNW powerhouse Team 2471, and consistent Texas contender Team 231. When the group assignments were announced back in March, we were excited to be competing in the same group as so many teams we admire!

April 8, 2021 was the final day to submit scores for the at-home challenges, and we watched the scores tick in hour by hour. By the time the scores all settled out, we had placed third in the entire Scandium Group! We had the highest score in the Power Port challenge, tied for first in the Interstellar Accuracy challenge, placed third in the Hyperdrive challenge, and placed fourth in both the Autonav challenge and the Galactic Search challenge. Team 5813 is proud of our great performance in such a highly competitive group! Morpheus would like to congratulate Team 4400 on winning the Scandium Group and Team 971 for being finalists! We had a great time competing in the Scandium Group and hope to get the chance to compete with some of these teams in-person in the future!

A reveal video for Microburst as well as videos of our skills challenges attempts will be posted soon. The team will now turn our attention to upgrading our 2020 robot, Tornado, for the 2021 offseason.

Morpheus Assigned to the Scandium Group 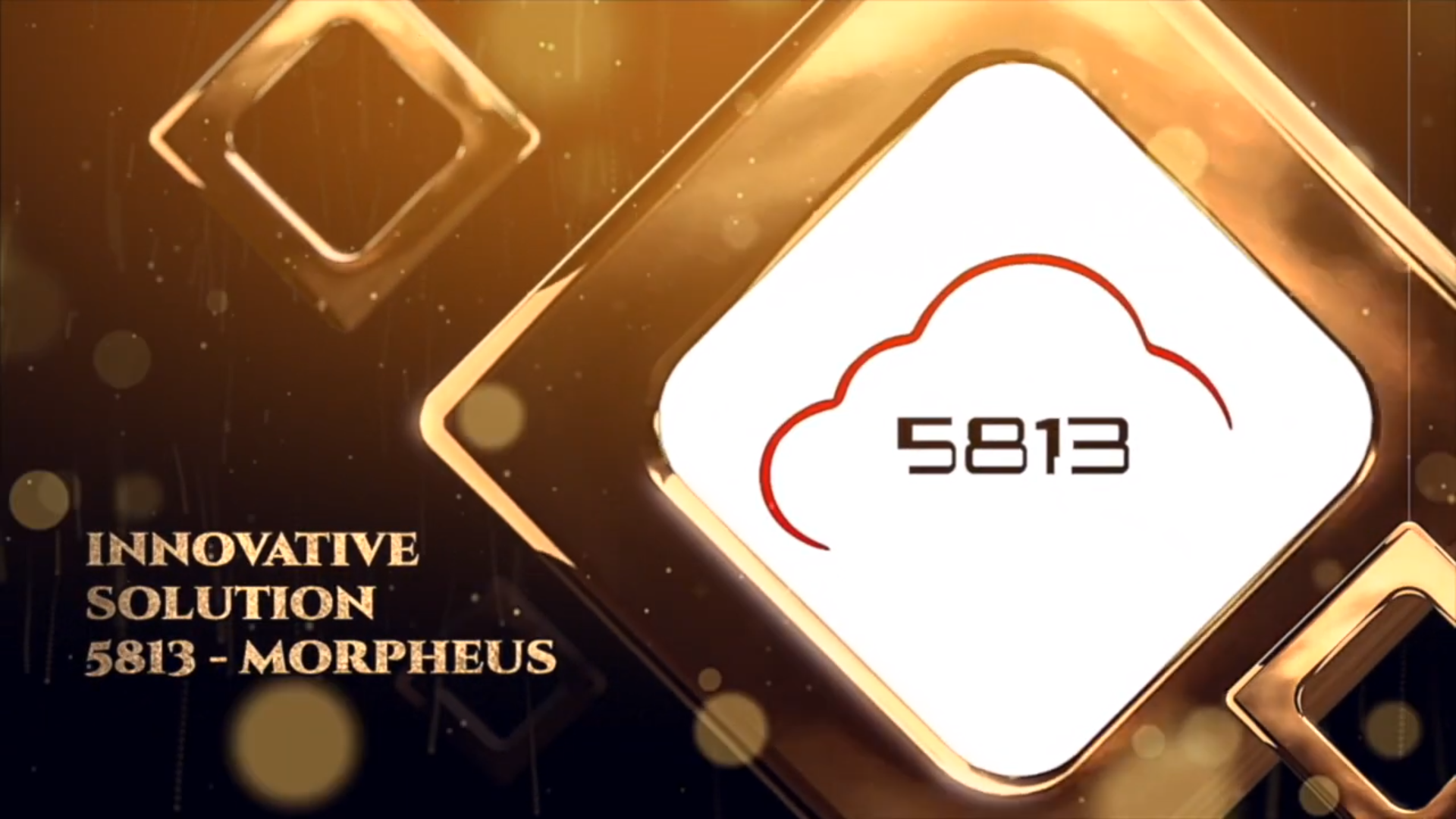 This year, in addition to the official FRC challenges, New England FIRST and BAE Systems have teamed up to host several minibot challenges using the ROMI robot system. In the first challenge, Mondrian Madness, teams had to use the ROMI robot to navigate an obstacle course both autonomously and under driver control. The Morpheus software team worked hard at this challenge and was able to get several excellent times. For the autonomous run, our time was 7.6 seconds. For the teleoperated run, our time was 7.58 seconds. Today was the award ceremony for Mondrian Madness, and we were excited to receive the 2nd Place Most Innovative Solution Award for our well documented and easy to understand codebase! Congratulations to all of the teams that participated! We look forward to participating in other minibot challenges in the coming months!

FIRST announced today that there will be no in-person competitions for the 2021 season. Despite this, Morpheus is busy working on our 2021 robot for the Infinite Recharge at Home challenges and we look forward to both competing in the at-home challenges and at potential offseason events later this year! 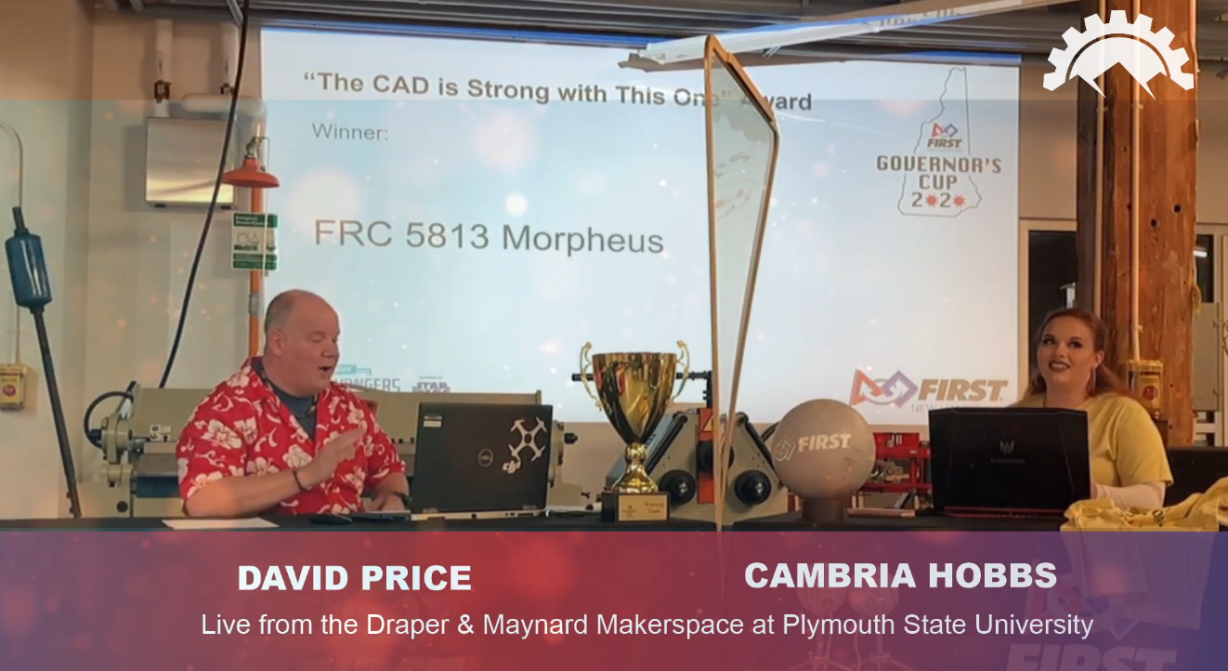 On October 24, 2020, members of Team 5813 attended the virtual New Hampshire Governor's Cup Competition! The students hosted a fantastic presentation on the "brain pan" electronics board technique that freed up a lot of space on our 2020 robot. Additionally, we gave technical and non-technical presentations to the judges. In the afternoon, members and mentors participated in a FIRST trivia challenge. The game was intense, but student Brianna M. proved victorious! Mentor Julia M. and student Gabe S. also performed exceptionally by placing 5th and 6th, respectively. During the award ceremony, we were thrilled to be receive "The CAD is Strong with This One Award" for our 2020 robot CAD! Morpheus had a great time preparing for and participating in this virtual competition and cannot wait for next season! 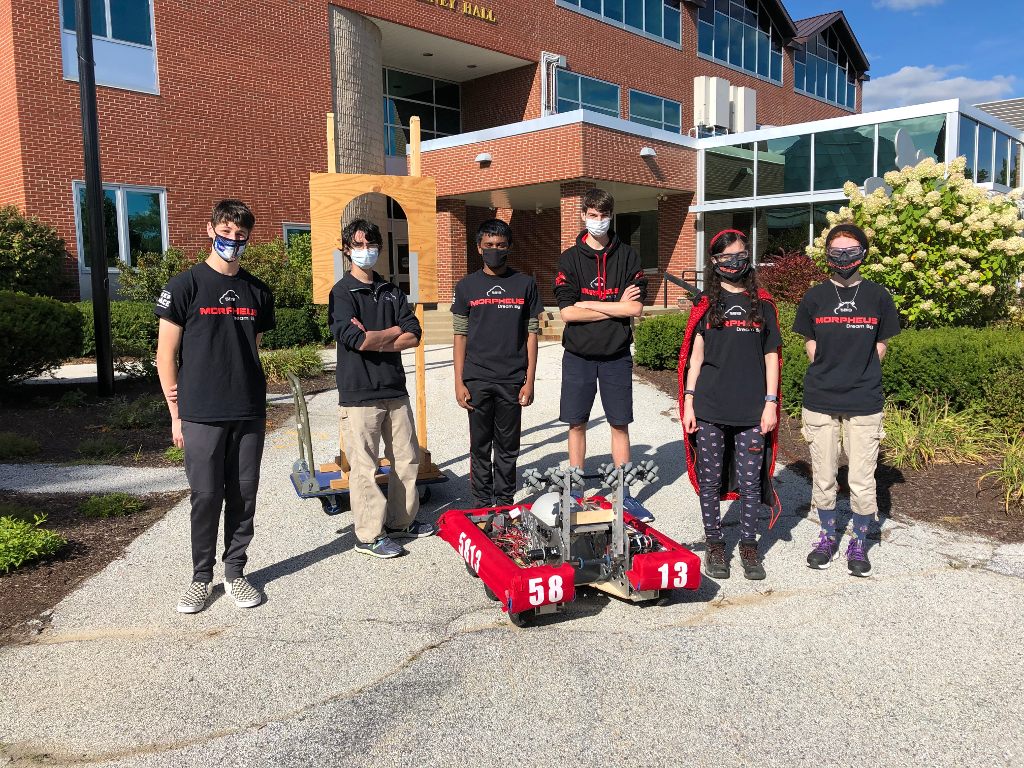 On September 12, 2020, Morpheus was honored to participate in yet another Aerospacefest, which was hosted by the McAuliffe-Shephard Discovery Center in Concord, New Hampshire. Throughout the day, we talked to participants about FIRST , FRC, and our team. It was great to discuss engineering and robotics with the community. We also demoed our 2016 robot, Goatnado! The Aerospacefest participants had a great time watching Goatnado take shots into the 2016 tower. At the end of the day, 5813 members got to observe a cool model rocket launch. Morpheus had a phenomenal time at the 2020 Aerospacefest! We look forward to working with the Discovery Center again in the future!

A Glimpse Into Building an FRC Robot 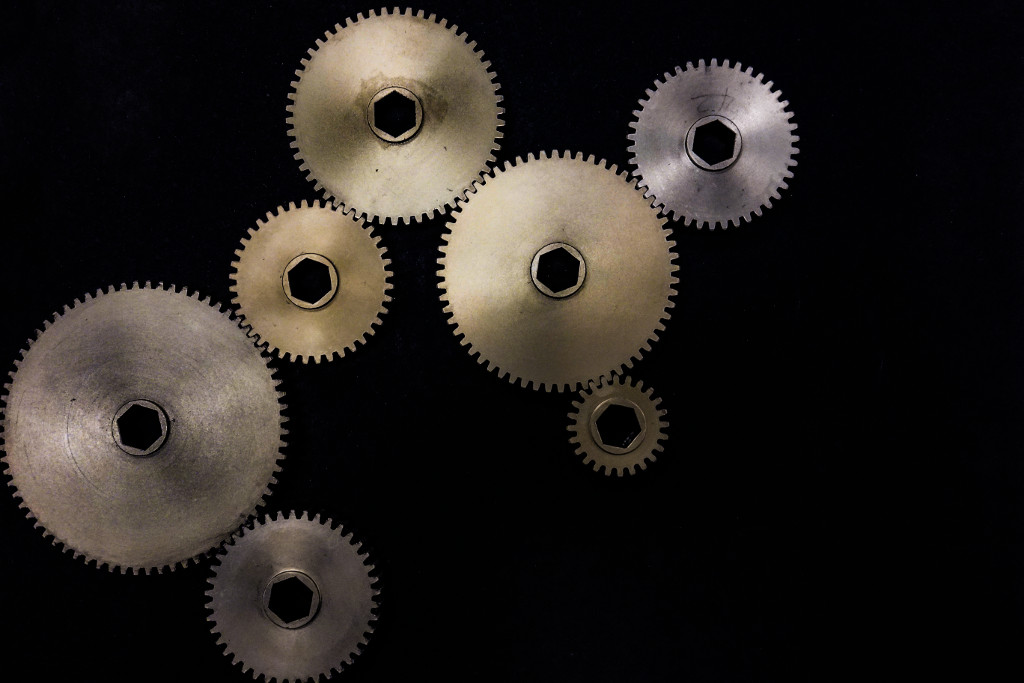 Today, Morpheus is proud to present a series of pictures created by one of our design mentors this spring. This project is called "A Glimpse Into Building an FRC Robot," and was completed by 5813 mentor and alum Daler K. for his humanities practicum at college. The goal of the project is to give a glimpse into the processes and timelines behind the creation of a competitive FRC robot. He used 2016 prototypes, CAD models, and Goatnado itself to arrange the photos and used Photoshop to edit them.

The project has been edited into a video slideshow and is available on our Media page and YouTube.

Infinite Recharge to be Replayed in 2021!

FIRST announced today that the 2020 Infinite Recharge game will be replayed in 2021 (with some modifications to be announced at the 2021 Kickoff) for the FIRST Game Changers season! Team 5813 is excited about this news as it means that we will be able to play Infinite Recharge after all. Unfortunately, this means that FIRST will not be sending out fields for offseason (preseason?) events this summer or fall, so no one will get any time on the real field till next year.

Morpheus is looking forward to iterating on our 2020 robot to make it the best it can be for the 2021 season. As such, we will not be posting pictures and/or videos of our designs until next year.

Good luck to all teams!