FRC Team 5813 Morpheus is a neighborhood robotics team from Concord, New Hampshire, that was founded in the summer of 2015. Morpheus competes in the FIRST Robotics Competition. 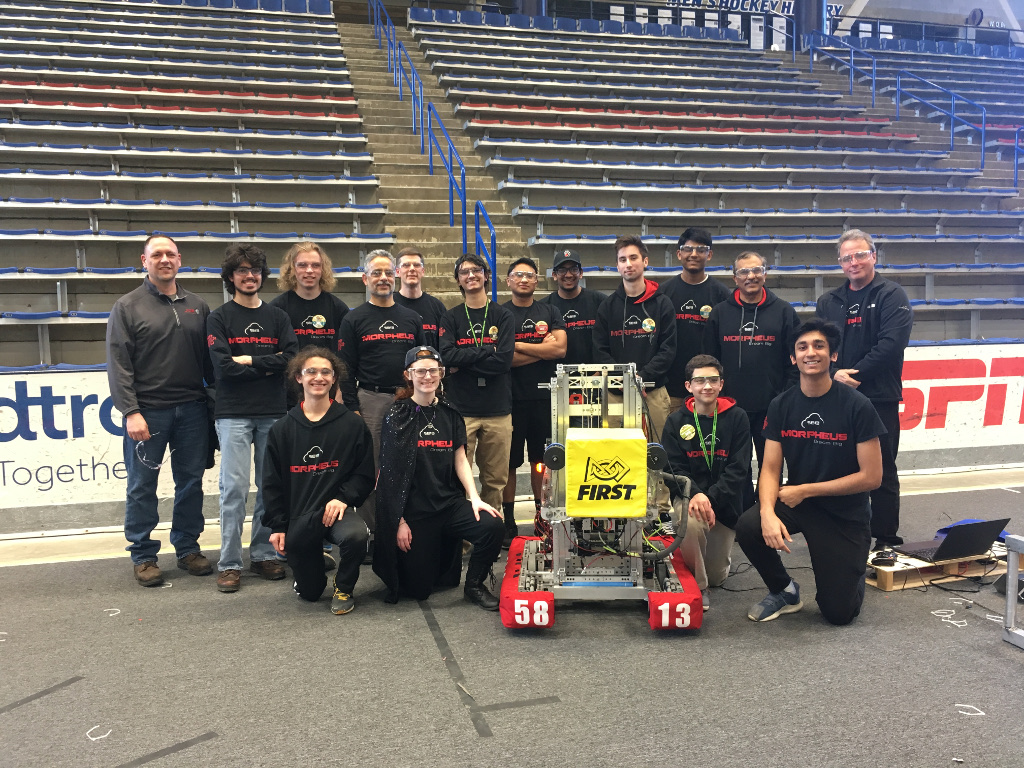 Since our team was founded, we have had a clear vision: Dream big and work to make our dreams reality.

Constantly improving, our team continually encourages learning and strives for excellence in all that we do. We are proud to inspire excitement for STEM within our team and throughout our community.

Over the years, we have created some great robots. You can check them out here.

In the summer of 2015, our team banded together to diligently design, build, and program an off-season robot to compete in an offseason tournament called Battle of the Bay. During this time, we learned how to use Vex Pro components and Solidworks. We placed fourth at Battle of the Bay and won a trophy for our accomplishments. Our pre-rookie season was a success for our team.

In 2016, we had a fantastic rookie year. We performed wonderfully at our district events, at the World Championship, and at offseason events. Our first event was the WPI District Event, where we fought our way to the semifinals. While we were at WPI, we won the Highest Rookie Seed Award and the Rookie All Star Award, which is the most prestigious award a rookie team can earn. At our next event, the UNH District Event, we won the Rookie Inspiration Award and almost won the semifinals against two of the best teams in New England! Our accomplishments qualified us for the New England District Championship, where the top 60 teams in New England competed for a spot at the World Championship in St. Louis, Missouri. After a tough competition full of learning experiences, we qualified for the World Championship! During the World Championship, we ranked in the top eight teams in our subdivision, which earned us the Highest Rookie Seed Award in our subdivision, and made it to the quarterfinals, which put us in the top two percent of teams worldwide. Through innovation, hard work, and diligent preparation, we were able to demonstrate our ability to compete at a world-class level. Following the Championship, we were semifinalists at the prestigious Battlecry@WPI offseason event, finalists at the Beantown Blitz offseason event, winners at the historic River Rage 20, and semifinalists at Battle of the Bay. For our team, which was a rookie team, this season was a phenomenal success.

Morpheus had a fantastic year in 2017. This was our best season yet! Our first event was the WPI District Event, where we were quarterfinalists. At our next event, the Southern New Hampshire District Event, we won the Creativity Award for our gear mechanism and shooter and became semifinalists. Our accomplishments qualified us for the New England District Championship, where the top 64 teams, out of all 196 teams in New England, competed for a spot at the World Championship in St. Louis, Missouri. After a tough competition, we fought our way to become District Championship Finalists, which qualified us for the World Championship for the second time in our two-year history! At the World Championship, we had a great time and ranked in the top twelve teams in our subdivision, which placed us in the top five percent of teams worldwide. Additionally, we ranked third in New Hampshire this year. This season, we were able to focus on developing an excellent robotics program and field a robot that could compete at a world class level. In the offseason, we were quarterfinalists at the highly-competitive Battlecry@WPI, semifinalists at Beantown Blitz, and quarterfinalists at Battle of the Bay. Morpheus' 2017 season was a huge success for our team.

The 2018 FIRST Power Up was a great year for 5813! In 2018, our two District Events were the SE Mass District Event in Week 2 and the UNH District Event in Week 5. Before bag day, we competed at the official Week 0 event and were finalists! At the SE Mass District, we were semifinalists and won the Innovation in Control award. At the UNH District, we seeded third and made it to the finals! At the New England District Championship, we ranked 19th and qualified for the World Championship in Detroit, Michigan. From April 25 to 28, we competed in the Curie Subdivision at the Detroit Championship. At the Championship, we won 9 of our 10 matches, ranked 7th, captained Alliance 5, and were quarterfinalists. This performance placed us in the top three percent of teams worldwide. At the extremely-competitive offseason event BattleCry@WPI, we placed second our of sixty in the qualification rounds, captained Alliance 2 to the semifinals, and won the General Staff award. Following BattleCry, we competed at Mayhem in Merrimack, ranked first in the qualification rounds, made it to the semifinals, and won the Gracious Professionalism Award. Then, in July, we were finalists at the Summer Heat offseason event! In the Fall, we won River Rage 22 and placed third at Battle of the Bay! This was Morpheus' most successful season yet!

The 2020 Infinite Recharge season was cancelled in early March 2020. Unfortunately, this meant that we did not get a chance to compete in 2020. In the fall, we participated in the virtual Governor's Cup competition. At Governor's Cup, the team was awarded the CAD is Strong with This One award for our 2020 robot CAD. As Infinite Recharge was replayed in the 2021 season, we were excited to have a chance to iterate on our designs for 2021.

The 2021 Infinite Recharge season has been very exciting for Team 5813. There were once again no in-person competitions this season, but we were able to participate in the Infinite Recharge at Home challenges. After building a brand-new robot specifically for the at-home challenges, our team was assigned to the Scandium Group where we faced off against many great teams from around the world. In the Scandium Group, we placed third overall by ranking first in both Interstellar Accuracy and Power Port, third in Hyperdrive, and fourth in both Galactic Search and Autonav! In addition to Infinite Recharge at Home, the team participated in several of the BAE Systems Minibot Challenges and walked away with the 2nd Place Most Innovative Solution Award for the first challenge, Mondrian Madness. In the summer, we iterated on our 2020 robot and competed in the Battlecry 21 Summer Series. At the first Battlecry 21 event, we were semifinalists. At the second Battlecry 21 event, we ranked first, were undefeated, and won the competition! In the Fall, we competed at River Rage, ranked first, went undefeated, and won the competition! At Governor's Cup/Battle of the Bay, our final competition of the season, we ranked third and won the event as the first pick of Alliance 1! The 2021 Infinite Recharge season was extremely successful.

Morpheus has earned numerous awards while competing in the FIRST Robotics Competition.

You can contact our team by emailing us at 5813@frc.team!