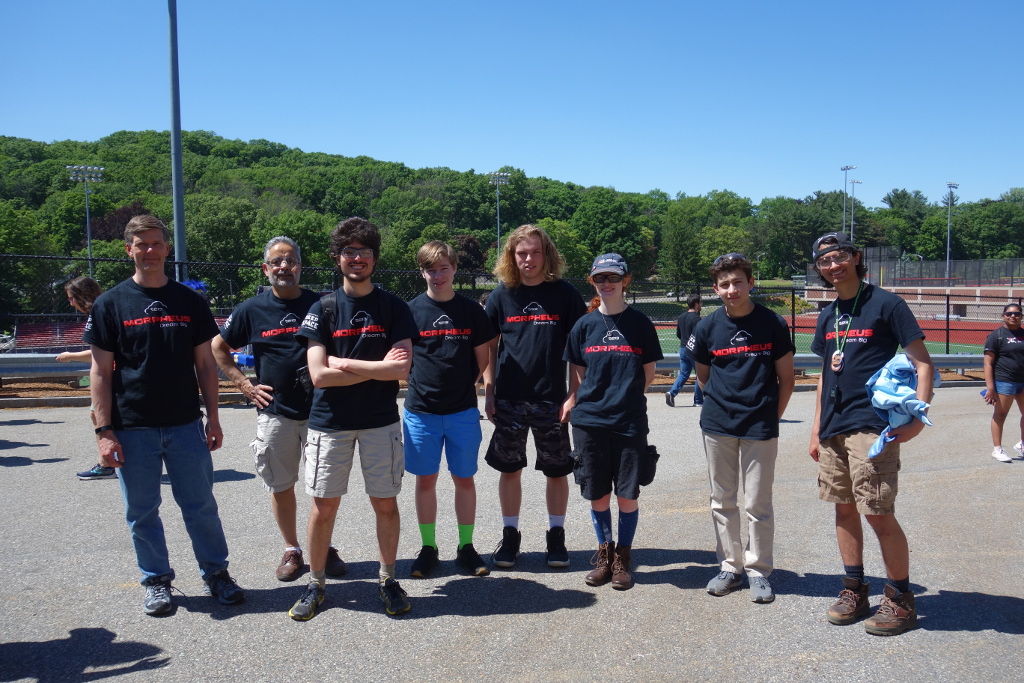 On June 8, 2019, Team 5813 members travelled to Worcester, Massachusetts, to compete at the 20th Battlecry@WPI. After load-in, we ran a few system tests to make sure everything was working. For this event, we added a new intake inspired by Team 254 (The Cheesy Poofs) and a climber inspired by Team 78 (Air Strike). In our practice match the next day, our climb worked perfectly on the field and the new intake scored wonderfully as well. In our qualification matches, we were able to quickly score hatch panels and cargo and also climb. Between matches, we talked to our friends and learned a lot from other teams. We especially learned a lot from Team 2791 (Shaker Robotics) from New York. After the first day of matches, we arrived the next day to find that our friends on team 2168 (Aluminum Falcons) had pranked us by placing a giant inflatable shark in our pit! At the end of the qualification rounds, we were ranked 11th out of 54 teams with a win-loss record of 6-2-0. During alliance selections, we were picked by Team 1100 (T-Hawks) to join Alliance 5. Together, we picked Team 5556 (Carriagetown Robotics) and got Team 2084 (Robots by the C) as our random pick. Our alliance decided on a strategy of 1100 placing 1 cargo, playing defense, and climbing; 5813 placing 1-2 hatches and 8-10 cargo; and 5556/2084 placing 4-5 hatches and parking on the dot. Our strategy worked beautifully in the first quarterfinals match. 1100 missed their climb, but everything else worked properly, which led to a narrow win over the powerful Alliance 10. Unfortunately, some electrical issues caused 2084 to not move at all in our second match, and another missed climb from 1100 led to a loss to Alliance 8. This loss meant that we did not qualify for the round robin in the afternoon. Although we were eliminated, we had a great time at the historic Battlecry 20! Morpheus would like to thank Team 190 and WPI for hosting another great Battlecry event and our alliance partners for a great run in eliminations. We hope to work with 1100, 5556, and 2084 again. Additionally, we would like to congratulate Teams 2791, 6328, 3623, and 1735 for winning the event! Overall, Battlecry 20 was a big success for our team. Our robot performed wonderfully and we got a nice shark from 2168! We can't wait for the rest of the 2019 offseason events!