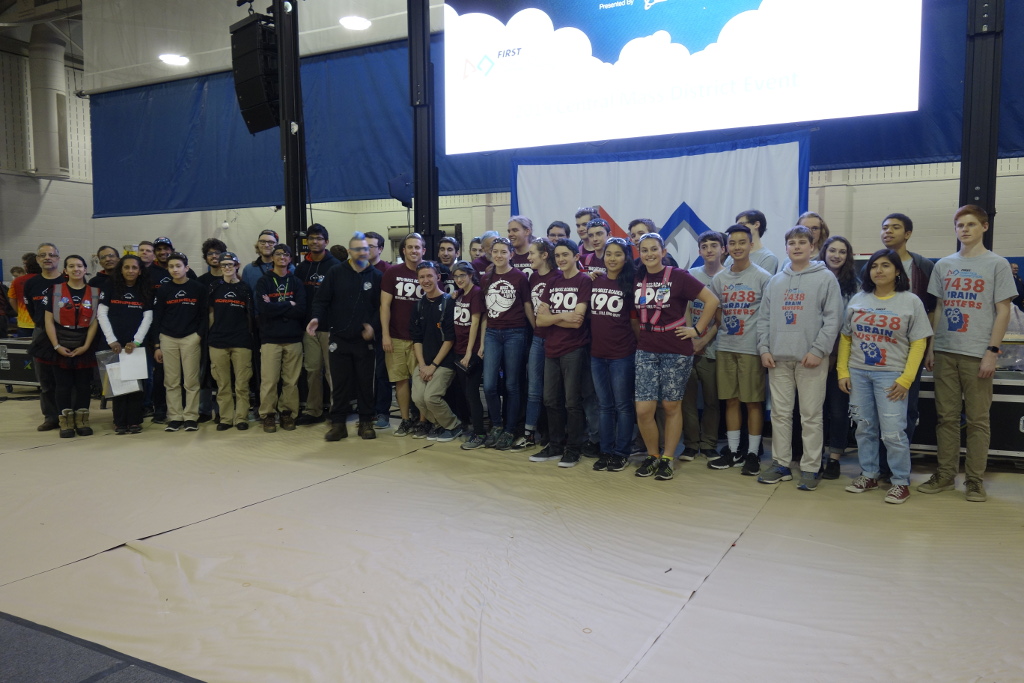 From March 29 to 31, 2019, we competed at the inaugural Central Mass District Event. After our first event, we made our elevator more reliable, and started working on a potential climber design inspired by Team 179 (Children of the Swamp). In qualification matches, we performed excellently. We placed about 6 hatch panels and 3 cargo in most matches. Additionally, our autonomous mode was finally working. The auto drove us to the back of either rocket and then handed control over to the driver so the hatch can be accurately placed on the back of the rocket. During alliance selection, we were thrilled to be selected by our friends on Team 190 (Gompei and the HERD) to join Alliance 4. Together, we selected the amazing rookie Team 7438 (Brain Busters) to join our alliance. With our alliance, we planned to have 190 work on the cargo ship and climb to level 3, 5813 work on a rocket, and 7438 play defense and climb to level 2. After two extremely close quarterfinal matches, we advanced to the semifinals to face Alliance 1, which was led by Team 78 (Air Strike). After a rough loss in the first match, our alliance scored a major upset victory in the second match! If we won the next match, we would be going to the finals! After a hard-fought match, Alliance 1 proved victorious. Although we had been eliminated, we were proud of our alliance's performance. We had a great time working with 190 and 7438 and hope to work with them again soon. Later, during the award ceremony, we were thrilled to be awarded the Autonomous Award for our innovative autonomous mode! Morpheus would like to congratulate the winning alliance and Team 5422 (Stormgears) for winning the Chairman's Award.

We are excited to see that we have enough District Points to qualify for the New England District Championship in two weeks! See you there!